Recognizing your True Calling Paves Way for an effortless Career 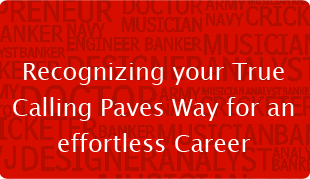 Belonging to the family of well settled engineers Manu was pushed to take up an engineering degree. He, being a hardworking and a studious student achieved the degree with flying colours and was well placed with a reputed Engineering Company. Surely the job profile best explored his educational degree but he felt tied up with the mundane routine.

All this continued for a while until the day when Manu was asked to lead his team in an international engineering event. This one event brought liveliness back into Manu and after years his family could see an enthusiastic Manu. On completion of the event Manu decided to take a vacation and spend some quiet time with his grandfather in his native village. In a casual conversation, Manu told his grandfather that how he wanted the event should never end, he thoroughly enjoyed himself in preparing for the exhibition, how he loved working with people from different backgrounds and how effortlessly he could co-ordinate with people from different teams. He found this event managing experience truly multifaceted. Having realized his grandson’s interest in event management & how his face lit up in just talking about the event he asked Manu to introspect about his true calling. The learned old man also requested Manu that he should build his career around his true calling so that his career leads to happiness & satisfaction.

Before Manu could jumpstart his career around his true calling he decided to inspire himself by reading about famous Indian personalities who gave up their flourishing careers to walk on the road less traveled. The path which was led by their true calling. True calling, as Oprah Winfrey says in one of her essays is “What you are born to do.” It is that inborn call which is built around your key strengths, something which requires lot of hard work but is equally enjoyable at the same time.

In his chase of understanding his true calling, Manu happened to read about Dr. Arundhati Roy .To his surprise Dr. Roy has studied Architecture at the School of Planning & Architecture, one of the most known names in India to study Architecture. She was introduced to the writer in her through screenplays of little known films like "In Which Annie Gives It Those Ones" and "Electric Moon". It was both a pleasure and surprise for her how she enjoyed writing so much. One of the excerpts from her interview read that when she wrote “The God Of Small Things” she literally locked herself up to be completely at peace while writing it. She never rewrote a sentence because her “thought” and her “writing are one thing”. She was so passionate and involved in writing a tale inspired from her childhood village of Aymanan, in Kerala. In the year 1998, her novel “The God of Small Things” went on to win the Man Booker Prize for the fiction category. Manu got his first clue a true calling would be one for which he is really passionate about.

While reading “Five Point Someone” Manu casually checked about Chetan Bhagat. He got to know that Chetan Bhagat is an alumnus of Indian Institute of Technology (IIT) Delhi and Indian Institute of Management Ahmadabad. After graduation he worked as an investment banker in Hong Kong. He had been working in Hong Kong for 11 years before he shifted to Mumbai to pursue his passion for writing. Manu was also astounded to know that Mr. Bhagat completed two of his novels while working as an Investment Banker. Chetan Bhagat conveys through his blog that he was offered a Mercedes as an initiative to retain him back as an investment banker, but he was determined to pursue his passion for writing as it gave him utmost satisfaction. A quote from his blog really appealed to Manu “Sometimes, when you listen to your own inner voice, things may fall into place.” This left Manu all the more determined to explore about event management.

While sipping his cup of coffee Manu read about Arham Farhaz, a former software engineer who gave up his job with an MNC because he realized that his true calling lay in motivating others. He came in touch with this inherent quality when on one of his projects he was asked to take lead despite being surrounded by his seniors. He was requested to do so because his mentor in the office noticed that he had the quality to inspire others. Arham has also won the National level competition for the “Best Social Impact” project in 2013. Arham’s initiative L.E.A.D—Learn. Excel. Achieve. Drive is being adopted for leadership development. Although he is all of 30 years of he is also one of the co-authors of "Against the Grain" by the motivational speaker and author, Brian Tracy. Manu got his second important clue that the right time to start is “now”.

When Manu purchased the latest collection of songs for pop music band "Euphoria", he was thrilled to know that the lead singer and the founder of the group Palash Sen is actually Dr. Palash Sen. The renowned singer is an orthopedic surgeon by qualification. In fact, quite interestingly, both his area for his medical practice & his studio are called “the clinic”. He formed his band Euphoria back in his college days. Although he studied to become an orthopedic surgeon he never gave up on his natural talent of singing.

It was a moment of self-discovery for Manu. He was very sure he would talk to his department head & HR if he could be given an opportunity to work in the Marketing & Events department of his company as he enjoyed his role as an event manager so much.

Following a career which is based on your true calling is the one which will give you utmost satisfaction. No matter how demanding it is, you will only strive to better it with much more passion & dedication. As Robert Luis Stevenson says “Don't judge each day by the harvest you reap, but by the seeds you plant”. May your true calling always be the inspiration behind the seeds of labor you sow.

If you are not too sure of what your "true calling" in life is, then Map My Talent can help you discover your inherent strengths and true talent. Take the aptitude test and personality test at Map My Talent and awaken to the true capabilities inherent in you.